Shed Plans - How To Build a Basic Shed - DIY

A shed solves a lot of storage needs for outdoor tools and equipment. It is also a great place for work projects that won’t clutter up the garage. To build a basic shed, follow these instructions. Note that the article includes exact plans for building a particular shed; however, you can modify them to custom-fit the shed to your own needs, alternatively you can download more shed plans here.

Types of Sheds and Buildings 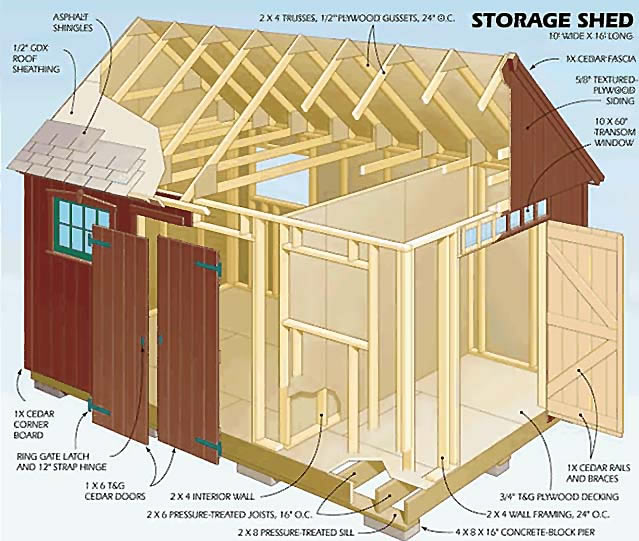 3.  Attach joists to the support beams and separate them with blocking.

First, you will need to attach a rim joist along the outer edge of each outermost support beam; each of these will need to be the same length as the beam underneath. Build-a-Shed-Step-3a

Then, you will need to install a series of floor joists across the entire length of the support beams; these will need to be the same length as the distance between the two rim joints so that they’ll fit between them. In the example design, the floor joists are all separated by 14.5-inch gaps except for the outermost two, which are 13 3/4 inches from their immediate neighbors; this is to allow a standard piece of plywood to line up with the outermost edge of the outermost joist but only cover half of an interior joist, allowing its neighbor to cover the other half so that both can be supported properly. Build-a-Shed-Step-3b

To keep the floor joists from moving, install a piece of blocking between each pair of floor joists along the center support beam. Build-a-Shed-Step-3c

4.  Nail plywood sheeting to the joists to form the floor. If necessary, use H-clips in addition to nailing the sheets into place; these fit between two pieces of plywood and lock them together for additional structural strength. In the example design, two standard sheets of 4’x8′ foot plywood are used whole and a third is sawn in half and used to fill in the 4-foot difference on either end. Because of the spacing of the piers, support beams, and joists, no additional cuts or adjustments are necessary. Note that the pieces of plywood are intentionally misaligned so that the floor doesn’t have a single seam running across the whole thing, which would be a significant structural weakness. Build-a-Shed-Step-4

5.  Build the framework for all four walls. To account for the fact that the front and back walls are different from each other (due to the doorframe in the front) and the side walls must both be sloped (to prevent rain from collecting on the roof), each of these will have to be tackled somewhat differently. It’s easiest to construct the back first, the front second, and the two sides last, as shown in the numbered image below. See How to Frame a Wall for more information before you read the instructions below.

Build the framework for the back wall. Make the top and bottom beams (a.k.a. the plates) the same length as the length of the floor which they sit. To keep your measurements simply, make the spacing between the vertical studs identical to the spacing between your floor joists. Note that the back wall should be lower than the front wall so that the roof slopes and directs rain away from the door. Build-a-Shed-Step-5a

Build the framework for the front wall. The front wall should be the same as the back wall except taller and with a door frame so that you can hang a door in the shed when you’re done.Build-a-Shed-Step-5b

Build the framework for the side walls. The bottom plate of each side wall should be the same length as the distance between the bottom plates of the front and back wall (so that the side walls will fit between them). The standard spacing between vertical wall studs in the US is 16 inches (from center to center, not from edge to edge); since this stud spacing doesn’t perfectly divide into the total length of the side walls in the example design, the two outermost studs make up for this discrepancy by being slightly closer to their neighbors. Most importantly, the top plate is angled so that the roof will be sloped, which makes the height of each vertical stud slightly different. If you’re not sure how to calculate the necessary height of each vertical stud in advance, make the two outermost vertical studs first, lay them the correct distance apart, cut a top plate that spans this distance, and then cut each remaining vertical stud individually based on the distance between the top and bottom plates at that exact location.Build-a-Shed-Step-5c

Assemble the four wall structures. Wall structures are usually nailed to the underlying support from the bottom up. However, if this is not possible with the design you’ve chosen, simply nail them downwards through the plywood and joists or toenail them into place by driving the nails downwards and at an angle. Note that you will probably need other people to help you hold the wall structures up until they can be attached to one another.

6.  Build rafters across the roof and separate them with blocking. These should overhang the walls of your shed for increased weather protection. Again, your measurements will be greatly simplified if you space the rafters the same way that you spaced your floor joists. When you’re done, attach pieces of blocking between each pair of rafters along the top plates. Build-a-Shed-Step-6

7.  Nail plywood sheeting to the rafters to form the roof. If you have added overhang, the plywood layout you used to cover the floor will have to be amended.Build-a-Shed-Step-7

8.  Cover the walls. You can use siding, textured plywood, or anything else that gives the shed a more finished look.Build-a-Shed-Step-8

9.  Add tarpaper to the roof. Start from the lower end of the roof slope and work your way upwards, making sure that each new level of paper overlaps the one below it to keep rain from seeping into the cracks. You can also use shingles or other roofing material if desired. Build-a-Shed-Step-9 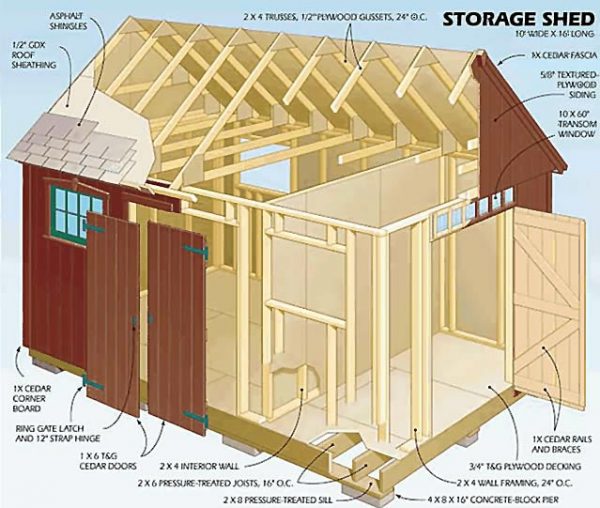 A shed solves a lot of storage needs for outdoor tools and equipment. It is also a great place for work projects that won’t clutter up the garage.